This is a variation of the previous cloud which attempts to show which words have been used more frequently in the last couple of days compared to previous days.
I’ve added a lot of the more common words to the stop word list (e.g. “librar*” and “google”) to try and allow some of the less frequently used words to gain importance. 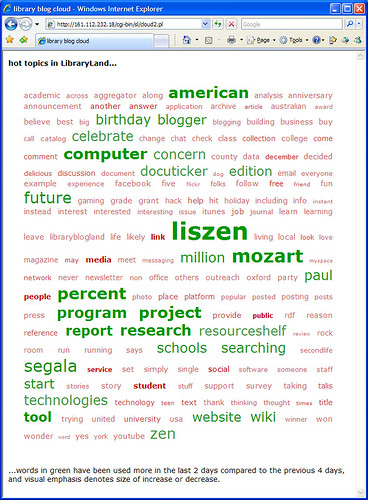 So, why is Mozart back in vogue? Several bloggers have recently posted about NMA Online (inc. Peter Scott’s Library Blog & ResourceShelf).
If a word is used several times in a post (e.g. “segala” and “liszen”) then that can make the word appear “hotter” than it perhaps should be, and some posts are appearing more than once (e.g. those from ResourceShelf) — I’ll try and fix that.
You can click on any of the words in the cloud to see links to relevant blog posts.
http://161.112.232.18/cgi-bin/sl/cloud2.pl
I’ll continue to tweak the code, so it might change over the next few days…