…they’d made “The Terminator” 33 years earlier, I’m guessing the Cyberdyne Systems Model 101 might have looked like this: 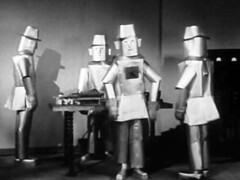 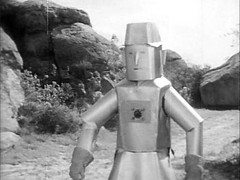 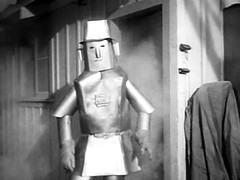 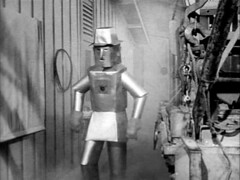 One of the things I love about the web is that it delivers all sorts of weird straight to your desktop! In this case, it’s the 15 part serial “Captain Video: Master of the Stratosphere“, from 1951, which appears to have had a budget of less than $1 per episode 🙂
The Internet Archive has an episode of the earlier “Captain Video” TV series, which seems to have been made on an even smaller budget 😀 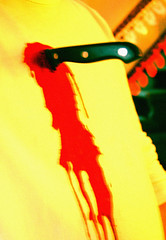 I’ve lost count of the number of times this year it’s felt like I’ve woken up in a parallel universe — it’s happened again this morning when I read about the US Lingerie Football League on the BBC News web site, which features “teams of models playing an American football game while dressed in lingerie”.
Now, I’ll be the first to admit I don’t know very much about American Football, but I’m pretty sure when men play it, they seem to wear full body armour and the kind of shoulder pads that would make a 1980’s Joan Collins green with envy. Can a couple of millimetres of silk and lace really provide the same level of protection? Where can you buy babydoll negligees with reinforced shoulder pads?
This opens up all sorts of interesting possibilities for alternative versions of popular sports whilst wearing totally inappropriate clothing. How about…

So, it’s Friday and we’re all winding down for the weekend — what’s the best combination you can think of? Do you ever get the feeling you’re either still asleep and dreaming, or that you’ve woken up in a parallel universe?
Apparently “artist” Damien Hirst will get £1m just for putting a few used fag ends into a box…

Personally, I’m blaming the switching on of the Large Hadron Collider for altering reality.
p.s. if the person who buys the butts reads this blog post, please get in touch as I’ve got a pile of old newspapers and a hankering for a ivory back scratcher.

Wow… that was kinda surreal — I was catching up with the Google News RSS feed for Alfred Hitchcock (who was born on August 13th) and there was this headline from today’s Telegraph and an article that mentions me (well, mentions my nickname, anyway):
Did Alfred Hitchcock make a secret cameo appearance in drag?

Now, I’ll ‘fess up straight away — the answer is “no”, but the devil in me likes to say “maybe he did”. Anyway, you can find further details and the background to the story on the wiki.
I have to admit that it’s been fun to spread the rumour, especially when it really does look like Hitchcock, but I guess now might be the time to reveal who it really is… if you really, really, really do want to know, then click here.