Graham and Ian have already said many of the things I was planning to say, so just a quickie blog post and I’ll try and add more later…
A big “thank you” to everyone who was involved in organising the conference — I think it’s safe to say it was a huge success. A huge amount of face-to-face “social networking” went on, which partly explains why I didn’t have time to blog anything!
I’m sure I read a blog post/comment from Stephen Abram that Enterprise wasn’t going to be an OPAC bolt-on front-end (like Primo, Endeca, AquaBrowser, VuFind, etc), but that’s certainly how it was pitched at the conference. One question I was planning to ask, but forgot, was whether or not the relevancy ranking algorithm would be tweakable — the demo threw up some iffy results (e.g. a search for “dogs” ranked a book that didn’t contain the keyword anywhere in the title/author/summary higher than other books that did). Being able to give certain MARC fields a higher priority for relevancy ranking is a “must”.
Keynote speaker Sue McKnight was extremely quotable, and here are a few of my scribbled bullet point notes from her session:

Ever since seeing Helene Blowers present, I’ve watched what presenters do with their hands (Helene is very kinetic and is almost impossible to photograph). CODI President Amy Terlaga must be double-jointed, as I certainly can’t do this with my thumbs (I tried, and it hurt!) 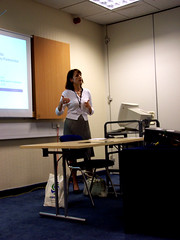 As Ian has already mentioned, the news about Horizon 7.4.x in the UK was extremely disappointing.
The two User Groups decided to combine, but decided to take a vote on what their new name should be. As soon as the name is chosen, I’ll rebrand the DUG Wiki (https://library.hud.ac.uk/dug). I’ll also be adding the presentations to the wiki (as soon as I’ve got permission from each presenter).
The plan is to put together a registration page for the new User Group that will:
1) register your organisation as a member
2) set you up with a wiki account (so you can edit the pages)
3) let you vote for the new name for the group
We’re also planning to look at chat technologies to help move away from face-to-face meetings, which are always difficult for non-UK members to attend.
So, keep a close eye on the wiki for further info!
I’ve also finished uploading all of my conference photos to Flickr… 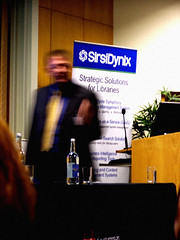 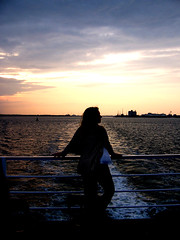 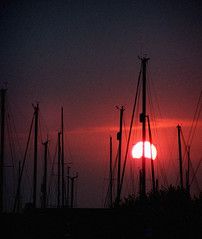 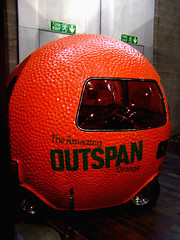 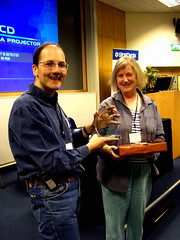 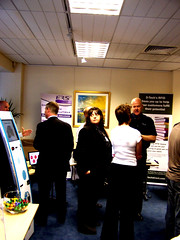 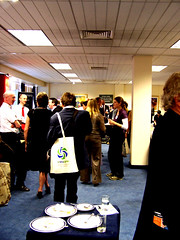 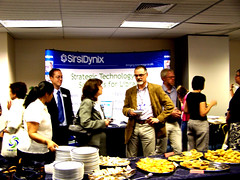 (Well, it’ll be sexy in-so-far as I’m including some gratuitous nudity in my session on “RSS and Social Networking” on Thursday. Will I be stripping off and revealing all in the name of “2.0”? You’ll have to come along and find out!)
I’m currently sat in Manchester Airport, waiting for a budget flight down to Southampton, which is playing host to this year’s “Dynix Users Group/European Unicorn Users Group Joint Conference“. High on the agenda is the merging of the two user groups, and hopefully a shorter name — my personal choice is still “SirsiDynix Libraries User Group”, if only for the cool “SLUG” acronym.
As Ian has already mentioned on his blog, European Horizon users are crossing their fingers that SirsiDynix CEO Gary Rautenstrauch’s “commitment to our worldwide customer base” will result in an announcement that Horizon 7.4.2 will be made available to non-US customers. Sadly, the 7.4.1 release was a US only affair and UK sites are still tootling along (quite merrily, it has to be said) on 7.3.4.
Right — must dash, my boarding gate has just been announced! 3G card allowing, I’m hoping to blog and Flickr the conference.