Just spotted “Asking Non-Users Why They Don’t Use the Library” (LISNews):

From the Newtown (CT) Bee, C.H. Booth Library is looking for opinions about the library from an unlikely source: the people who do not use it. As part of a study for long-range planning at the library, made possible through a $9,000 grant awarded in 2006 by the Connecticut State Library, consultants Kevin McCarthy, director of Perrot Library in Old Greenwich and Christine Bradley, Connecticut Library Consortium executive director, have created a survey for local residents. To date, more than 300 surveys have been returned, a return rate that Mr McCarthy said at a meeting January 9 is very good.

At Huddersfield, we’ve been busy trawling our usage stats — firstly for our initial Equality Impact Assessment of opening hours, and more recently an analysis of non and low usage by staff and students.
We’ve only done an quick overview of non-usage (specifically usage of electronic resources, library borrowing, and number of visits to the library), but it’s thrown up some interesting trends such as:
1) Art & Design Students — only 20% of them regularly use our electronic resources, but (relatively speaking) they are heavy users of the library (visits and borrowing)
2) the older you are (apparently we’re not allowed to say “Mature Students” anymore), the less likely you are to use the library and it’s facilities — the drop off rate is fairly alarming, especially as we have a large number of students who didn’t come to us straight from doing their A Levels
3) female students are more likely to borrow books than males, but are less likely to make use of the library outside of the normal 9-5 opening hours

According to our 2004 and 2006 Student Satisfaction Surveys, the most common reason for not visiting the library is that users are able to access information electronically.
Strangely, according to the 2006 Survey, the percentage of respondents who come to the library to borrow books has dropped from 91% in 2004 to 80%… yet our most recent SCONUL statistics have shown that during 2005-6 the number of active borrowers had risen by over 10% (compared to 2004-5) and the circulation figures had also risen by well over 10%.  Looks like books are getting more popular each year!
Also of interest is the fact that students are now twice more likely to use/own a laptop than a regular desktop PC, and that they are twice as likely to access electronic resources from off-campus than on-campus. Surprising, only 22% of laptop owners said that they would like to be able to bring their laptop into the library and connect to the network (which they can now do).
When asked what they most like about the library, the most common response is the staff (yay!). Our RFID self-service, which allows the library to be fully open for 16 hours a day during the week, is also extremely popular.
Book stock (e.g. availability & tidyness of shelves) and noise are the biggest gripes — there’s a definite clash between those who want to study alone in silence, and those who want to study in social groups (often with loud discussion). Much of our library is open plan and noise carries easily, plus several of the designated silent areas are next to stairwells or discussion rooms. We’ve got a major refurb coming up soon, so hopefully we’ll be able to zone things up with better noise management.
The Satisfaction Survey is always a great place to get ideas — advance notices and floor plans were just two of the in-house developments that were in direct response to student comments.
The complaints about the difficulty in finding books on the shelves got me thinking — many times the book is in the right place, but students often struggle with Dewey (heck, I struggle with Dewey!) and are therefore unable to locate the right shelf…
Eureka!
Whilst thinking about the problem in the bath last night, I came up with a possible solution…
The problem is that the floor plans on the OPAC only point you to the general location of the book, and the Subject Teams have said that it would be too much work for them to keep track of exactly what is on each shelf (which would be needed to make the maps more accurate).
Over last summer, we implemented RFID — here’s a picture of Sarah, one of the librarians at the Barsnley LRC, keeping her RFID unit in tip-top condition… 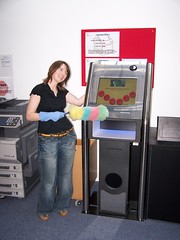 That got me thinking if we could use RFID to keep a better track of book locations, so here’s my idea…
1) give each row of shelves a unique number (e.g. 23) and display that number clearly on the shelf ends
2) give each individual shelf a unique identity (e.g. 23A, 23B, etc), perhaps using a spare plastic video case with a large spine label – e.g.

3) in each of the video cases, place a RFID tag and program it with a unique ID (so that you know which shelf it represents)
4) a member of staff does a periodic scan of the shelves using a hand-held RFID reader (e.g. once a fortnight), always scanning a shelf from left to right (i.e. reading the shelf ID tag first, then the books on that shelf)
5) the list of barcodes from the reader is then uploaded to the OPAC
6) for any given item, the OPAC can scan the list of barcodes and locate exactly which shelf that item was on when it was last scanned — it just needs to find the item barcode in the list, and then read backwards through the list to find the unique shelf ID
7) by analysing where the item barcode appears in relation to adjacent item barcodes and shelf IDs, it can make a “best guess” as to where the book physically is — is it near the middle of the shelf, near the far left, or 2/3 of the way along, etc
8) the OPAC puts all that together and displays a little shelf graphic next to each item – e.g.

I’d love to know if anyone out there is already doing something like this?
(the image of the book shelf is from nickobec’s photostream)