I’m just starting to pull our data out for the JISC Library Impact Data Project and I thought it might be interesting to look at 5 years of grades and book loans. Unfortunately, our e-resource usage data and our library visits data only goes back as far as 2005, but our book loan data goes back to the mid 1990s, so we can look at a full 3 years of loans for each graduating students.
The following graph shows the average number of books borrowed by undergrad students who graduated with an specific honour (1, 2:1, 2:2 or 3) in that particular academic year… 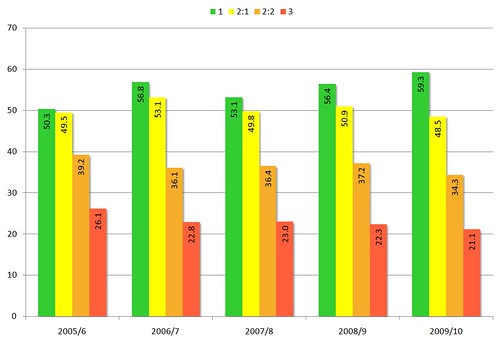 …and, to try and tease out any trends, here’s a line graph version…. 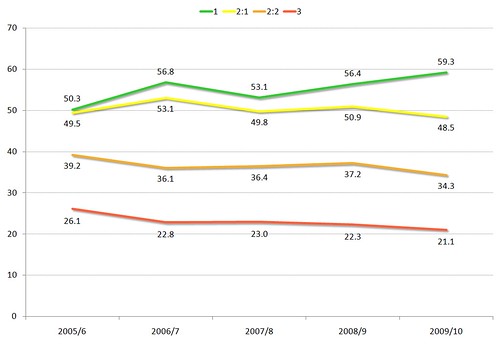 Just a couple of general comments:

At a recent event in Edinburgh, I was asked about how we generate the “people who borrowed this, also borrowed…” suggestions in our OPAC and whether or not there are privacy issues with generating them.
Last week, I popped over to Manchester for a meeting of the JISC funded SALT (Surfacing the Academic Long Tail), which is one of the recently funded Activity Data projects. Part of the discussion at the meeting was around how to generate recommendations for items that haven’t circulated many times.
At both events, I promised to put together a blog post detailing the method we use, so here it is!
To generate recommendations for book A, we find every person who’s borrowed that book. Just to simply things, let’s say only 4 people have borrowed that book. We then find every book that those 4 people have borrowed. As a Venn diagram, where each set represents the books borrowed by that person, it’d look like… To generate useful and relevant recommendations (and also to help protect privacy), we set a threshold and ignore anything below that. So, if we decide to set the threshold at 3 or more, we can ignore anything in the red and orange segments, and just concentrate on the yellow and green intersections… There’ll always be at least one book in the green intersection — the book we’re generating the recommendations for, so we can ignore that.
If we sort the books that appear in those intersections by how many borrowers they have in common (in descending order), we should get a useful list of recommendations. For example, if we do this for “Social determinants of health (ISBN 9780198565895), we get the following titles (the figures in square brackets is the number of people who borrowed both books and the total number of loans for the suggested book)…

When we trialled generating suggestions this way, we found a couple of issues:

To try and address those concerns, we tweaked the sorting to take into account the total number of times the suggested book has been borrowed. So, if 10 people have borrowed book A and book B, and book B has only been borrowed by 12 people in total, we could imply that there’s a strong link between both books.
If we divide the number of common borrowers (10) with the total number of people who’ve borrowed the suggested book (12), we’ll end up with a figure between 0 and 1 that we can use to sort the titles. Here’s a list that uses 15 and above as the threshold…

If you think of the 3 sets of suggestions in terms of the Long Tail, the first set favours popular items that will mostly appear in the green (“head”) section, the second will be further along the tail, and the third, even further along. As we move along the tail, we begin to favour books that haven’t been borrowed as often and we also begin to see a few more eclectic suggestions appearing (e.g. the “How effective have National Healthy School Standards…” literature based study).
One final factor that we include in our OPAC suggestions is whether or not the suggested book belongs to the same stock collection in the library — if it does, then the book gets a slight boost.

I’m chuffed to bits that the Library Impact Data bid that Huddersfield submitted, along with 7 project partner institutions, was one of the successful ones in the JISC Activity Data Programme and the project will kick off on Tuesday this week!

If you’re interested, keep an eye on the project blog: http://library.hud.ac.uk/blogs/projects/lidp/