I hate being reminded of how quickly time flies!
Nearly a year ago, I added a post about how five of our OPAC tweaks were being used:
1) “did you mean?” spell checker suggestions for failed searches (more info)
2) serendipity keyword suggestions for failed searches (more info)
3) “people who borrowed this also borrowed…” suggestions (more info)
4) books with similar subject headings (more info)
5) other editions of books (more info)
I left the logging running, so we now have 11 months worth of data to show usage — by “usage” I mean when a user actually clicked on one of the links displayed by the tweak.
Click any of the graphs to view the full sized version.
Usage by month 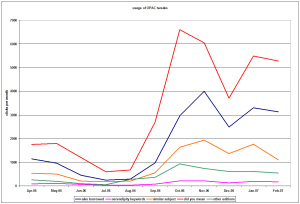 Being an academic site, usage of all library services varies by month — usage drops heavily during summer, and dips during Christmas and Easter.
You can easily see that “did you mean” and “people who borrowed this” are the most heavily used.
The “people who borrowed this” and the “similar subjects” tweaks are both ones that promote serendipity when browsing items — you’re viewing one book but are being given links to other relevant items.
Although the “serendipity keyword suggestions” is the least used feature (partly because it only appears under certain circumstances), it’s getting enough usage to justify the couple of hours coding it took.
Here’s a breakdown of the average number of daily clicks, along with the peak number of clicks each tweak has received in a single day… 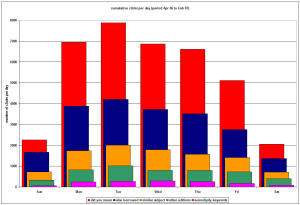 It’ll be interesting to see if Tuesday is also the busiest day for other library services.
Usage by tweak 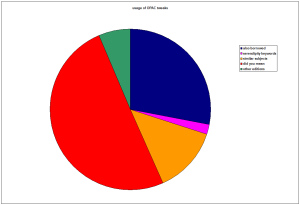 There’s almost a doubling in usage going on here from the “serendipity keywords” to the “did you mean”. I said it last time and I’ll say it again now — if you don’t have a spell checker on your OPAC, then you need to hire a web developer and add one a.s.a.p.!
Usage per hour 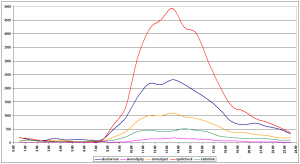 That odd little bump in usage around 5pm has smoothed out now.
Conclusion
Even with the least used tweaks, there’s more than enough usage to justify the development time, so I’m extremely happy with the graphs.
Assuming I don’t get run over by a bus, call back next year to find out if the usage has increased!