Just as we were getting ready for bed last night, we heard a loud and slightly distressed “meow” from outside the house. Fearing a cat had been run over, we went out to investigate but couldn’t see anything in the darkness and the meowing had stopped. After a quick rummage for a torch, we checked the front of the house again, and, just to be sure, had a quick look around the back garden — again, nothing.

After scooping her up and bringing her indoors, Bryony checked with the neighbours to see if anyone was missing a kitten — no-one was. However, a neighbour said a stray cat had been asking for food earlier on yesterday. On her way back, Bry spotted the mother pacing around and heading back into our garden. So, back out with the torch and this time we found two more kittens.

After eventually coaxing the mother (who’s quite tame but looks very young) to come into the house, we had a couple more checks just to make sure we’d got the entire litter — hopefully we have, as the mother stopped fretting once she saw the three were safe and sound (we’ve checked the garden again this morning).

We’re pleased to say all four are doing fine this morning and have pretty much drunken all of Elmo‘s cat milk supply (which we give her as a treat) and chomped their way through plenty of food. Not surprisingly, Elmo’s sulking about not having the house to herself.

Hopefully the local Cats Protection League will be able to come and collect the family and find them a good home, especially as they all seem in good health.

If your heart has been melted by kitteh cuteness — ours certainly have been! — please feel free to make a small donation to Cats Protection (we’ll be making one and I’m happy to match your donation as well if you let me know) 🙂

The local branch of the Cats Protection League will be coming to collect the family on Monday, so we’ve got a Kitten Weekend to look forward to! A big “thank you” to everyone who’s donated to the CPL — we’ll be matching those with a donation to the main charity, along with another donation to the local branch.

The mother and kittens are in fine fettle and eating us out of house and home!

If you want an overdose of cuteness, there are lots more photos on Flickr 🙂 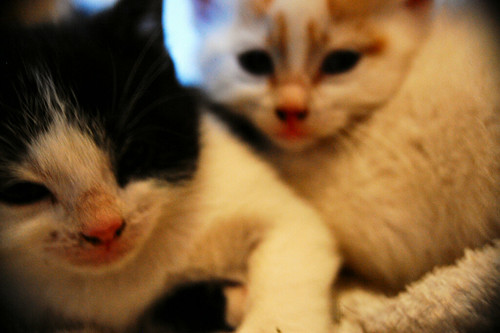