Colours, and the moods they evoke, play an important role in Hitchcock’s films.
With that in mind, I got ImageMagick to figure out the average colour of each of the 1000 frames for “North by Northwest” — you can see the results here.
To put the average colours into context, here they are annotated with a selection of scenes…

Getting the average colour of a given image got me wondering if it might be possible to do the same with the book cover scans on the OPAC. You could then virtually arrange and group books by their cover colours, in the same way that Huddersfield Public Library physically did last year: 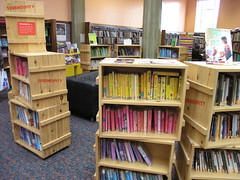 I love Lego mosaics, so I thought this was really cool… 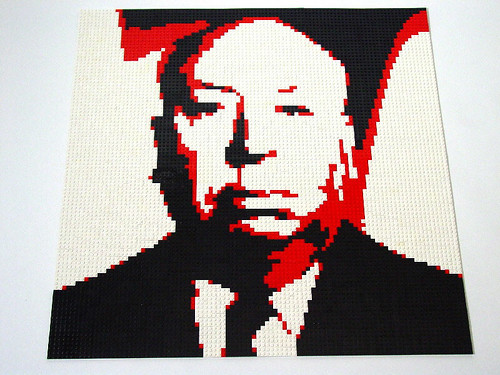 It’s by Nathan Sawaya — http://www.brickartist.com/alfred_hitchcock.html
There’s some really funky large sculptures on his site, including candy canes, a lego dress, and Han Solo in carbonite!
In terms of coolness, it’s up there with the CubeSolver and the 4 foot Lego Homer.
Those of you who aren’t easily offended might also want to check out The Brick Testament (also available in traditional book format).

Yikes — it’s 2 months since the last Hitchcock update, so here’s the latest news!
Finally! After years of craptastic “public domain” releases from the likes of Laserlight and Brentwood, fans in the USA should be getting some decent transfers of Hitchcock’s early films.  Lionsgate Home Entertainment will be releasing a 3 disc box set on 06/Feb/2007.
The upcoming UK Optimum Releasing box set (scheduled for the end of January) has been expanded and now includes 4 extra titles (“The Ring”, “Champagne”, “The Farmer’s Wife”, and “Murder!”).  The transfers have been licensed from the likes of Studio Canal and Granada, so should be top notch.  Be warned that Orbit Media might be releasing low quality PD transfers of the same films around about the same time in the UK!
The French release of Bon Voyage / Aventure Malgache proves that there are decent prints of both films available.  Sadly (for non French speakers), this release is French only with no subtitles.  Speaking of which, Alain Kerzoncuf has a new article over at “sense of cinema” — “Hitchcock’s Aventure Malgache (or the True Story of DZ 91)“.
Alfred Hitchcock Presents: Season Two has been out for a while now.  The good news is that Universal has seen sense and released the second series on standard DVD9 discs, rather than the more unreliable DVD18.  I’m still busy adding info to the page in the wiki for this release.  There’s no sign of a non-US release for this set yet.
To be honest, I think Universal in Europe have just given up and will never release any half decent Hitchcock DVDs — they seem happy just to repackage and rebundle the same old transfers.  Germany is the latest victim of Universal’s greed, with a collection of new DVDs that just contain the same old tired transfers… seriously folks, it’s nearly 2007 and the only place in the world where you can buy a widescreen (i.e. non pan&scan) transfer of “The Birds” is in the US & Canada!
I haven’t quite managed a new wallpaper every week, but here are the recent ones (click to download larger versions):

The desktop wallpaper this week is a poster from “Family Plot“:

(click to view different resolutions)
On the wiki, I’ve started adding Hitchcock soundtrack albums.
Over at the BBFC site, they’ve just classified “Number Seventeen” from Optimum Releasing.  Also spotted that they’ve classified “Downhill” from Sound & Media — the running time matches the transfer used in the excellent German Concorde box set, so fingers crossed that we’re going to get a decent transfer in the UK!
Finally, Amazon France have posted my copy of “Bon Voyage / Aventure Malgache“, so I’ll post images as soon as it arrives.

I’ve stated adding a weekly Hitchcock desktop wallpaper to the new wiki, so I’m going to try and get back into the habit of regular Hitch related blogging at the same time.
The wallpaper this week is a poster from the 1936 film “Secret Agent“, starring John Gielgud, Peter Lorre, and Madeleine Carroll:

I spotted last week that Optimum Releasing had submitted a couple of early Hitchcock films to the British Board of Film Classification, so I emailed them and Emilie Barra was kind enough to reply and let me know that they’re planning a Hitchcock box set for UK release in early 2007. What’s exciting is that Optimum were recently acquired by Studio Canal, so they should have access to high quality transfers used in “Les Premières Oeuvres” box sets (vol 1/vol 2/vol 3). The planned Optimum box set will include:

Finally, recent additions & updates to the site include screengrabs for:

It’s been awhile since I’ve posted something Hitchcock related on the blog, so here’s the first in an infrequent series of Hitchcock/Simpsons comparisons that I’ve just added to the wiki.
To start off, there’s “Saboteur” and “Three Men and a Comic Book”:

And secondly, here’s “Psycho” and “Itchy and Scratchy and Marge”:

(click on the images to view larger versions in the wiki)

To anyone thinking of buying the new region 2 release of Psycho, my advice would be…

To be honest, I’m getting utterly tired of the way Universal UK is treating Hitchcock fans and this release is just another shining example of how little the UK branch of the company cares.
First of all, the film transfer is exactly the same one they used for the original 1999 release in the UK – the bitrate graphs are exactly the same.
For crying out loud – it says “SPECIAL EDITION” on the packaging! What on earth is special about re-re-releasing a 6 year old transfer that was regarded as being poor to start with?
Secondly, we have the extras… but wait, where’s the excellent 94 minute “Making of” documentary that’s been available on every US release of the DVD since 1999? Heck, it even appeared in the UK Psycho Collection set! Sadly, it’s not included in this so-called “special edition”.
Instead of that, we get the heavily edited “AFI Salute” (15 minutes instead of the original 71 minute broadcast) and the “Masters of Cinema” interviews (again, edited down to 34 minutes from the original 55 minutes).
So, don’t even think about buying this DVD – put the money towards getting the US “Masterpiece Collection” instead!