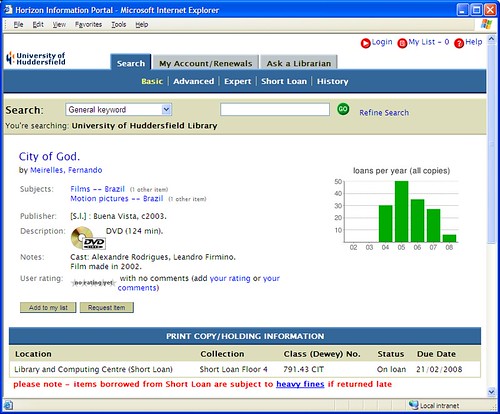 Following on from the first part of the guide, here’s the low down on the rest of Hitchcock’s films from the 1920s.
In the US, virtually of the DVD releases of the following films have been lower quality budget “public domain” discs.  Whilst these are a cheap way of getting hold of the films, you’ll probably be disappointed with the video quality.
4) The Ring (1927)
By far the best transfer to date is in the French Les PremiÃ¨res Oeuvres 1927/1929, volume 1 box set from Studio Canal.  For anyone considering this box set, it’s worth noting that the French subtitles (although generated by the DVD player) cannot be easily disabled during playback.
In 2007, there’ll be new DVDs released in the UK (by Optimum Releasing) and in the US (by Lionsgate Home Entertainment) — these should have transfers on par with the French box set.
5) Downhill (1927)
Currently unavailable in the US, “Downhill” has seen a number of good DVD releases (see this page to compare the transfer quality).
If I had to suggest one, then I’d recommend you purchase the German The Early Years box set from Concorde.  Although 3 years old, the set still contains some of the best transfers available.
Completists might want to note that none of the DVD releases of “Downhill” use the original green tinting for the sea-sickness scenes.
6) Champagne (1928)
For many years, “Champagne” was only available on low quality bootlegs — however, 2005 saw two releases on DVD.  Once again, it’s the French release which is the best.
7) Easy Virtue (1928)
“Easy Virtue” has seen numerous DVD releases, but all seem to be taken from the same low quality video source.  According to this 1937 newspaper articles, the British Film Institute may have a good quality print in their archives so there is still hope that we might see a decent quality release in the future.
8) The Farmer’s Wife (1928)
Once again, it’s that French box set from Studio Canal which contains the best transfer.
In 2007, we should see a new DVD in the UK from Optimum Releasing using the same high quality transfer.
9) The Manxman (1929)
In a repeat of the information for “The Ring”, the French box set contains the best transfer currently available, and 2007 releases from Optimum Releasing (UK) and Lionsgate Home Entertainment (USA) should have similar high quality transfers.
10) Blackmail (1929)
Although “Blackmail” is available in a box set from Studio Canal, I’d recommend the German release on the Arthaus label.
The German DVD contains both the “talkie” version of the film and also the the original silent version.  Although very similar, there are interesting differences between the two versions and some might even prefer the more natural performances in the silent version.
The French and German DVDs also contain the amusing “sound test“, shot to check how Anny Ondra‘s voice would sound on film.  Hitchcock takes the opportunity to embarrass Ondra with some good old English innuendo!
Summary
To date, the best releases of Hitchcock’s earliest films have been in France and Germany, but 2007 should see similar quality releases of some of the 1920 films in both the USA and the UK.  Fans in the UK should note that “Orbit Media” are planning to release a clutch of early Hitchcock films on DVD in early 2007, but these will be low quality “public domain” transfers — definitely a case of buyer beware!

Welcome to the first part of my guide to Hitchcock on DVD!
Introduction
I’ve been running the Hitchcock DVD Site for over 3 years and, in that time, I’ve built up a collection of nearly 200 Hitchcock DVDs.  Over the course of the coming weeks and months, I’m going to try and cover Hitchcock’s entire career and, at the same time, discuss which are the best DVDs to buy.
To build up the best collection of Hitchcock on DVD, you need to have a region free DVD player.  You also need to be able to view both PAL and NTSC format DVDs — this requires either a DVD player that can convert from one to the other, or a television set that can display both.  To get the best of Hitchcock on DVD, you’ll be buying DVDs from around the world!
I’m going to split Hitchcock’s career up into decades, so the first article will cover the 1920s and that last will cover his final films from the 1970s.  Out of the 53 major films Hitchcock directed, 50 are now officially available on DVD.
A quick side note — for the film year, I’m using the IMDB entry.
END_OF_DOCUMENT_TOKEN_TO_BE_REPLACED

Yikes — it’s 2 months since the last Hitchcock update, so here’s the latest news!
Finally! After years of craptastic “public domain” releases from the likes of Laserlight and Brentwood, fans in the USA should be getting some decent transfers of Hitchcock’s early films.  Lionsgate Home Entertainment will be releasing a 3 disc box set on 06/Feb/2007.
The upcoming UK Optimum Releasing box set (scheduled for the end of January) has been expanded and now includes 4 extra titles (“The Ring”, “Champagne”, “The Farmer’s Wife”, and “Murder!”).  The transfers have been licensed from the likes of Studio Canal and Granada, so should be top notch.  Be warned that Orbit Media might be releasing low quality PD transfers of the same films around about the same time in the UK!
The French release of Bon Voyage / Aventure Malgache proves that there are decent prints of both films available.  Sadly (for non French speakers), this release is French only with no subtitles.  Speaking of which, Alain Kerzoncuf has a new article over at “sense of cinema” — “Hitchcockâ€™s Aventure Malgache (or the True Story of DZ 91)“.
Alfred Hitchcock Presents: Season Two has been out for a while now.  The good news is that Universal has seen sense and released the second series on standard DVD9 discs, rather than the more unreliable DVD18.  I’m still busy adding info to the page in the wiki for this release.  There’s no sign of a non-US release for this set yet.
To be honest, I think Universal in Europe have just given up and will never release any half decent Hitchcock DVDs — they seem happy just to repackage and rebundle the same old transfers.  Germany is the latest victim of Universal’s greed, with a collection of new DVDs that just contain the same old tired transfers… seriously folks, it’s nearly 2007 and the only place in the world where you can buy a widescreen (i.e. non pan&scan) transfer of “The Birds” is in the US & Canada!
I haven’t quite managed a new wallpaper every week, but here are the recent ones (click to download larger versions):