Whilst finalising my presentation for the 2009 UKSG Conference in Torquay, I thought it would be interested to dig into the circulation data to see if there was any indication that our book recommendation/suggestion services (i.e. “people who borrowed this, also borrowed…” and “we think you might be interested in…”) have had any impact on borrowing.
Here’s a graph showing the range of stock that’s being borrowed each calendar year since 2000… 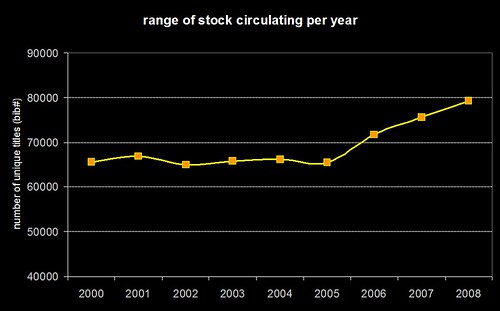 Just to be clear — the graph isn’t showing the total number of items borrowed, it’s the range of unique titles (in Horizon speak, bib numbers) that have been borrowed. If you speak SQL, then we’re talking about a “count(distinct(bib#))” type query. What I don’t have to hand is the total number of titles in stock for each year, but I’d hazard a guess that it’s been fairly constant.
You can see that from 2000 to 2005, borrowing seems to have been limited to a range of around 65,000 titles (probably driven primarily by reading lists). At the end of 2005, we introduced the “people who borrowed this, also borrowed…” suggestions and then, in early 2006, we added personalised “we think you might be interested in…” suggestions for users who’ve logged into the OPAC.
Hand on heart, I wouldn’t say that the suggestions/recommendations are wholly responsible for the sudden and continuing increase in the range of stock being borrowed, but they certainly seem to be having an impact.
Hand-in-hand with that increase, we’ve also seen a decrease in the number of times books are getting renewed (even though we’ve made renewing much easier than before, via self-issue, telephone renewals, and pre-overdue reminders). Rather than hanging onto a book and repeatedly renewing it, our students seem to be exploring our stock more widely and seeking out other titles to borrow.
So, whilst I don’t think there’s a quick any easy way of finding out what the true impact has been, I’m certainly sat here with a grin like a Cheshire cat!

8 thoughts on “The impact of book suggestions/recommendations?”