Kudos to everyone at the University of Prince Edward Island, Canada — in under 30 days, they’ve migrated from their legacy ILS to the Open Source Evergreen system!
One quote on Mark’s blog really jumped out at me:

This is a “skunkworks” planning process: as we progress we figure out how stuff will work and then we make it so. If we can’t make it so, we move back the appropriate number of steps until we have something that works and gives us a reasonable path to a better outcome. Much different than the normal process – the big advantage is we get used to solving problems and making accommodation, rather than striving for perfection at every turn. In this Web 2.0 world this is the way to grow. The disadvantage is that we could create configurations that will need to be changed down the road and could lead to some additional work/headaches down the road. We hope not, but working in this mode always creates that risk. 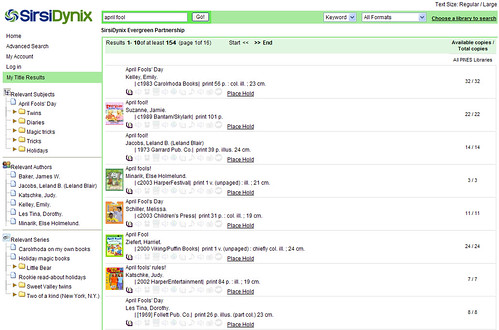