Warning — long blog post ahead!
I’ve been promising to post something about our new catalogue PCs …but first, a bit of background:
Like most large(ish) academic libraries, we’ve got dedicated catalogues PCs… lots of them… on every floor! From memory, we had at least 35 of them before the start of the refurbishment. We tended to use PCs that were no longer suitable for staff and they’d often be 5 or 6 years old. Unless staff remembered to turn them off every evening, chances are they’d get left on 24/7.
After a quick Google search, it looks like the average PC & monitor uses around 2.5 pence (UK) per hour (probably more now that electricity costs have risen in the last 12 months). So, if left on 24/7, then it would use 60 pence per day, £4.20 per week, or around £218 per year. Multiply that up by the total number of PCs (35) and we might have been paying around £7,600 per year! :-S
When I saw the plans for the refurbished floors, the first thing I noted was that there was an increased number of catalogue PCs on each floor (bringing to grand total to 45). Again, if left on 24/7, that could cost us nearly £10,000 per year.
Anyway, a couple of things coincided this summer. Firstly, the University (which has been busy improving recycling, etc) was crowned the “Most Improved University” in the annual People & Planet’s Green League table (more info here). Secondly, at the Poster Promenade event in June, I spotted something interesting on one of the stands… 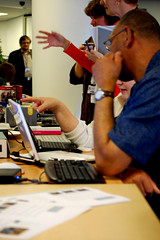 On the left-hand side of that photo is a small black box with a cool blue LED — a Viglen MPC-L mini PC. It ships with Xubuntu Linux, 256MB of memory and a 80GB hard drive, and has all the usual connections that you’d see on a PC (6xUSB, VGA, audio, and network). There’s no fan inside, and the metal case acts as a large heatsink for the low spec’d CPU.
Our IT Dept had evaluated them, but the non-standard operating system and the relatively poor performance had put them off. However, they looked ideal for catalogue PCs and, according to the Viglen web site, they only use £1 of electricity per year!
A quick hunt around on the Viglen web site also threw up the fact that they can be purchased with a VESA mount, so the PC can be attached to the back of a flat screen monitor — potentially a huge space saver.
Due to the limited time available, I didn’t fancy trying to figure out how to run Xubuntu as a PAC and instead I installed XP and configured it in the same way as our other catalogue PCs (using Public Web Browser as the Windows shell). The mini PC is *just* about powerful enough to run a web browser smoothly. We normally use McAfee antivirus on University PCs, but that killed the mini PC (it uses far too much CPU and too much memory), so I went with a freebie antivirus option instead.
The mini PCs weren’t too difficult to image. After finally managing to get Norton Ghost to run off a USB drive, it took about 20 minutes to image each mini PC.
So, enough talk, let’s get to the good bit with some pictures!
First of all, you’ll need a TFT monitor with 4 VESA mounting holes on the back: 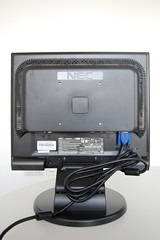 The VESA mounting cage for the mini PC looks like this: 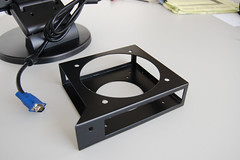 You can see the mini PC connections on these two photos: 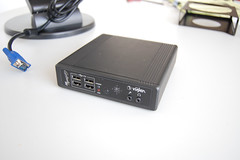 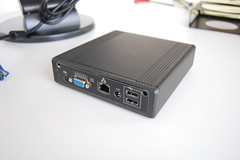 And here you can get a feel for the size (that’s a 17″ TFT monitor behind it): 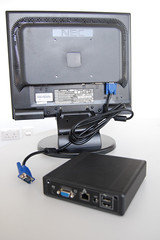 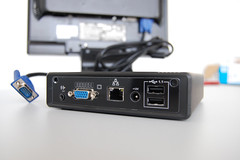 The mini PC would have no problems fitting into a 5.25″ drive bay on a standard PC: 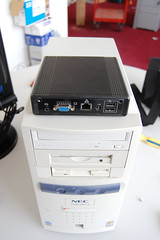 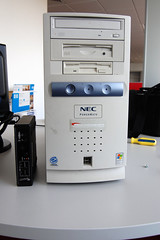 Here’s the mini PC inside its cage: 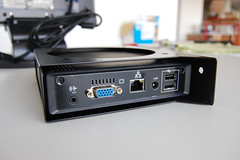 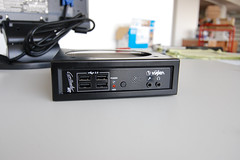 Next up, you screw the cage onto the back of the monitor: 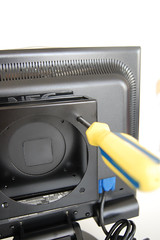 Shame they don’t bundle a short VGA lead with the PC!: 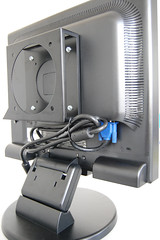 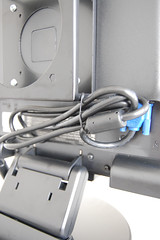 Then slip the mini PC into its cage and hook up the VGA cable: 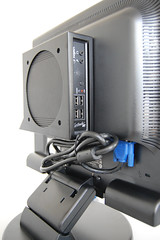 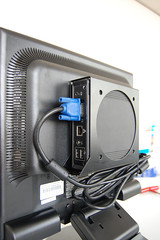 The whole thing is secured using a padlock, which traps all the cables (no more stolen mice!): 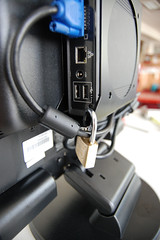 From above, you can see just how small the mini PC is: 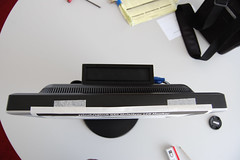 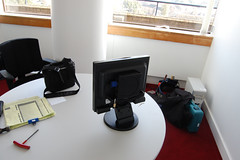 Setting them up took a little bit of time, as tidying up the various cables so that they’re hidden behind the TFT is a bit tricky: 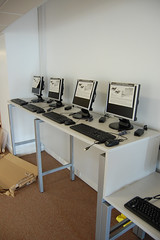 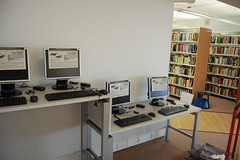 And, voila — 6 new eco-friendly catalogue PCs and not an ugly PC base unit in sight! 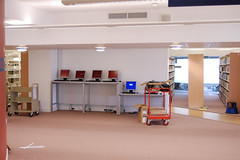 I set the mini PCs up to drop the monitor into standby after 15 minutes, so hopefully we’re going to save a few thousand pounds in electricity this year and maybe we’ll manage to stay in the top 10 in next years’ Green League table 🙂
—-
[edit] I forgot to mention that the mini PC is powered using a 12 volt laptop style power adaptor.