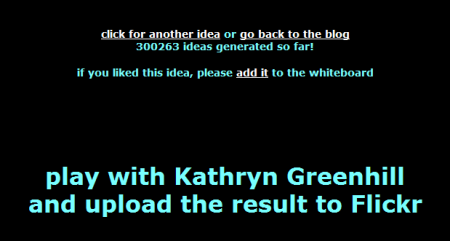 All the talk about unconferences over at Library 2.0 Ning got me wondering how many people would come to one based in the UK?
If you’ve not come across the term before, an unconference tends to have a general theme (e.g. Library 2.0) but the actual agenda for the event is decided on the day by whoever turns up. In fact, the people who do turn up are the “right” people for that particular event. There may be a small number of pre-planned sessions (e.g. someone talking about how they’ve used a blog in their library), but the idea is very much that you decide what you’d like to learn about and then one (or more) of the delegates volunteers to talk about it.
All attendees are expected to participate in some way — either by giving a short presentation or talk (vaguely relevant to the theme), or by asking questions during the sessions. Once the agenda for the day has been agreed, there will typically be multiple sessions running at the same time and a “two feet” rule applies — if the session you’re in isn’t of interest or isn’t what you thought it would be, you just leave and join one of the other sessions.
As you can imagine, the emphasis is very much on networking, discussion, spontaneity, serendipity, and the sharing of experiences. In fact, in some ways, an unconference emulates the networking that goes outside of the sessions at a formal conference.
So, if there was such a unconference in the UK, would you consider going? 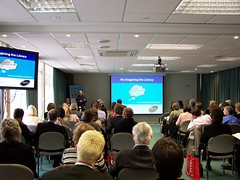 I can’t remember the last time I was up and out of bed before 6am, but this morning I’m giving a remote presentation about Web/Library 2.0 to the 2006 CODA Conference in Brisbane, Australia.
Given the choice, I’d much rather being doing it in person… instead of being sat here in Huddersfield where it’s pitch black outside and raining heavily!
SirsiDynix did offer to let us use their webinar software, but we’ve decided to do the presentation using Skype (for audio) and Festoon (to share my desktop).
A few years ago, I’m sure doing this would have involved someone running a copy of the presentation at the venue whilst I spoke over the telephone.  However today, we’ll be doing it with free software and it won’t cost either CODA or myself a single penny/cent/dollar.
Plus, I get to do the presentation wearing a pair of jogging bottoms and an old t-shirt, and unbrushed hair! 😀

The only problem with offering to do presentations is that they don’t leave you any time to blog about the actual event itself!!!
For those who prefer an electronic version, here are the 3 presentations I gave today:

If you have any questions or comments, you can always use this blog or you can email me at:

….right — got to dash off to get ready for the conference meal!!!

I’m giving a presentation about Web 2.0 and Library 2.0 later on this week at the DUG/HUG (UK) Conference 2006 and I’m wanting to demo some of the great things libraries have done with Library 2.0 and Web 2.0.  In particular, I’ve got one slide that has two spare bullet points of space left and I can’t decide what to put there…
Here’s what I’ve got already:

I’ve no idea if anyone will read this blog post in time, but if you can come up with one or two more great examples of libraries doin’ it for themselves, please post a reply! You’ve got exactly 12 hours before I need to finalise the presentation and get the handouts printed — the clock is ticking!
I reserve the right to cherry pick two of the best responses (that’s assuming I get any!) and in return you’ll get to have your name in lights …well, projected on a screen during the presentation 😀
Cheers in advance 🙂

I’m just putting the finishing touches to a presentation about Library 2.0 I’m giving tomorrow at the University Science and Technology Librarians Group Summer 2006 meeting.
I’m even beginning to have second thoughts — trying to sum up the last 2 or 3 years worth of Web 2.0 and Library 2.0 “stuff” in under 45 minutes (when I could happily talk about any single aspect of it for an hour) is proving a real challenge!
Anyway, once I get back from the event, I’ll update this post with a copy of the presentation.
END_OF_DOCUMENT_TOKEN_TO_BE_REPLACED