A good couple of years ago, I blogged about “lending paths”, but we’ve not really progressed things any further since then. I still like the idea that you can somehow predict books that people might/should borrow and also when you might get a sudden rush of demand on a particular title.
Anyway, whilst heading back up north after the “Library Domain Model” workshop, I got wondering about whether we could use historical circulation data to manage the book stock more effectively.
Here’s a couple of graphs — the first is for “Strategic management: awareness and change” (Thompson, 1997) and the second is for “Strategic management: an analytical introduction” (Luffman, 1996)…


The orange bars are total number of times the book has been borrowed in that particular month. The grey bars show how many times we’d have expected the book to be loaned in that month if the borrowing for that book had followed the global borrowing trends for all stock.
Just to explain that it a little more depth — by looking at the loans for all of our stock, we can build up a monthly profile that shows the peaks and troughs throughout the academic year. If I know that a particular book has been loaned 200 times, I can have a stab at predicting what the monthly breakdown of those 200 loans would be. So, if I know that October accounts for 20% of all book loans and July accounts for only 5%, then I could predict that 40 of those 200 loans would be from October (200 x 20%) and that 10 would be from July (200 x 5%). Those predictions are the grey bars.
For both of the books, the first thing that jumps out is the disconnect between the actual (orange) number of loans in May and the prediction (grey). In other words, both books are unusually popular (when compared to all the other books in the library) in that month. So, maybe in March or April, we should think about taking some of the 2 week loan copies and changing them to 1 week loans (and then change them back in June), especially if students have had to place hold requests in previous years.

For some reason, I didn’t take any photos at the “Library Domain Model” event itself, but I did do the “tourist thing” on the South Bank… 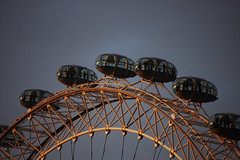 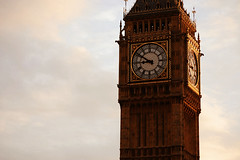 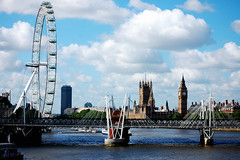 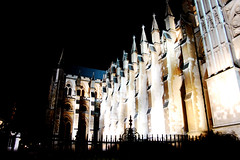 For anyone who’s interested, I’ve just posted a couple of HotStuff widgets: www.daveyp.com/hotstuff/widgets/
If you’ve got a blog which is listed, you can add a widget to show your current “Hot or Not” rating…

The second widget allows you to add a word cloud (based on either all words, words used by a specific blog, or for a specific word)…

Both widgets are available as either WordPress sidebar widgets or as embeddable JavaScript.

We’ve had loan data on the OPAC for a couple of years now, although it’s only previously been visible to staff IP addresses. Anyway, a couple of months ago, I revamped it using Google Graphs and I’ve finally gotten around to adding a stats link that anyone can peruse — you should be able to find it in the “useful links” section at the foot of the full bib page on our OPAC.
As an example, here are the stats for the 2006 edition of Giddens’ “Sociology“…


This blog is no longer updated. Some of the links and images may no longer work.