Well folks, CODI 2006 is over!
It looks like it was another excellent conference, so congratulations to everyone involved in organising the event and many thanks to those of you who kept the rest of us up-to-date with your blog posts and photographs 🙂
If you were at CODI 2006 but you’re not a blogger, please consider posting your session notes and conference summaries to The Gordian Knot — there’s a lot of Horizon & Dynix sites out there who would love to read them!
The updates from the final day are…
Phyllis has posted:
» CODI 2006 — Customizable, Flexible
» CODI 2006 — day 3. Pocket Circulation
Over at the CODI 2006 / Salt Lake City, there’s:
» Mary’s week so far
» Carol’s update
Kevin has posted:
» Sumary of Codi2006 Days 2 and 3
The codi2006 tagged images at flickr are now up to 459 — that almost 3 times as many as last year! 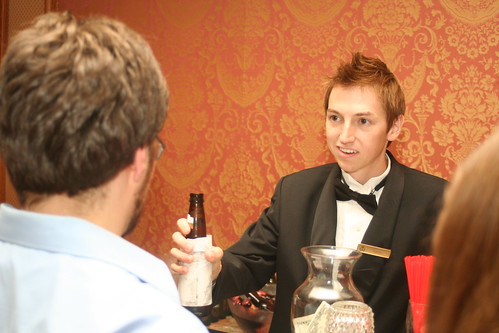 It’s 9am in Salt Lake City on the 3rd and final day of CODI 2006.
Let’s catch up with the overnight action!
There’s now nearly 300 photographs tagged with “codi2006” at flickr 🙂
Over at The Gordian Knot, Super Susan and Luke have been playing catch up:
» The Missing Face (Steve Nielsen)
» Good news for serials catalogers
» OZDUG stars shine at CODI meeting
» The World of Indexes According to Shelley
» Migration – The Path to…
There’ll probably be a couple more updates, but let me say that I hope everyone has a great final day and a safe journey home! 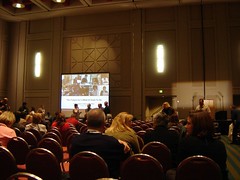 It’s now 3pm in Salt Lake City on the 2nd day of CODI 2006.
Here’s what the bloggers have been up to…
Ben has posted the following:
» CODI 2006: Accessing Your Statistics
» This conversation could have happened anywhere…
» The cashless circ desk
Susan has posted this on “The Gordian Knot“:
» R is for Ed Riding

It’s now 8:30am on day 2 of CODI 2006 in Salt Lake City and I guess most delegates will be breakfasting at the moment.
Let’s catch up with the action…
Over at The Gordian Knot, Susan “suzyq” Johns-Smith has posted her analysis of the opening keynote speeches:
» A Cautious Beginning
Ben has confirmed that those librarians were doing the internationally recognisable “YMCA” dance:
» CODI 2006 photos (first set) are now on Flickr
And at www.thezbar.net, the anonymous blogger/bloggerette/bloggerino is indeed venting their spleen:
» VISIONS OF CODI: DAY ONE
…I remember being amazed at the number of people who sat knitting during presentations at CODI last year. I now have nightmares that one day I’ll do a presentation and the entire room will be filled with people knitting away (clackerty-clackerty-clackerty-clackerty-clackerty…) 😀

It’s now midnight in Salt Lake City, so the first day of CODI has come to an end. However, I’m pretty sure that there’ll still be a hardcore of delegates hovering around the bar!
Let’s catch up with the activity in the last 12 hours…
Kevin “Fiddling Librarian 3.0” Smith has posted his summary of day one:
» Codi 2006 Day One
Ben Ostrowsky has posted another two articles:
» CODI 2006: SQL tips from John Craig at alpha-G
» A reflection on conferences
…and Ben’s also posted 82 photographs of the first day to his flickr account!

It’s now 12:30pm in Salt Lake City.
Ben Ostrowsky is the first person to blog about the opening session:
» CODI 2006 Opening Session
Knowing Ben, there’ll be some photographs on his flickr account soon! 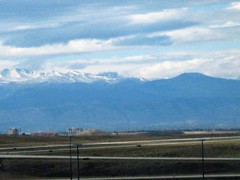 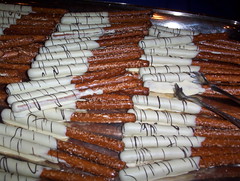